Astro Tours was made to connect
mankind to the stars.

Lets take a break, sit back, and enjoy the galaxy. All aboard Astro Tours. 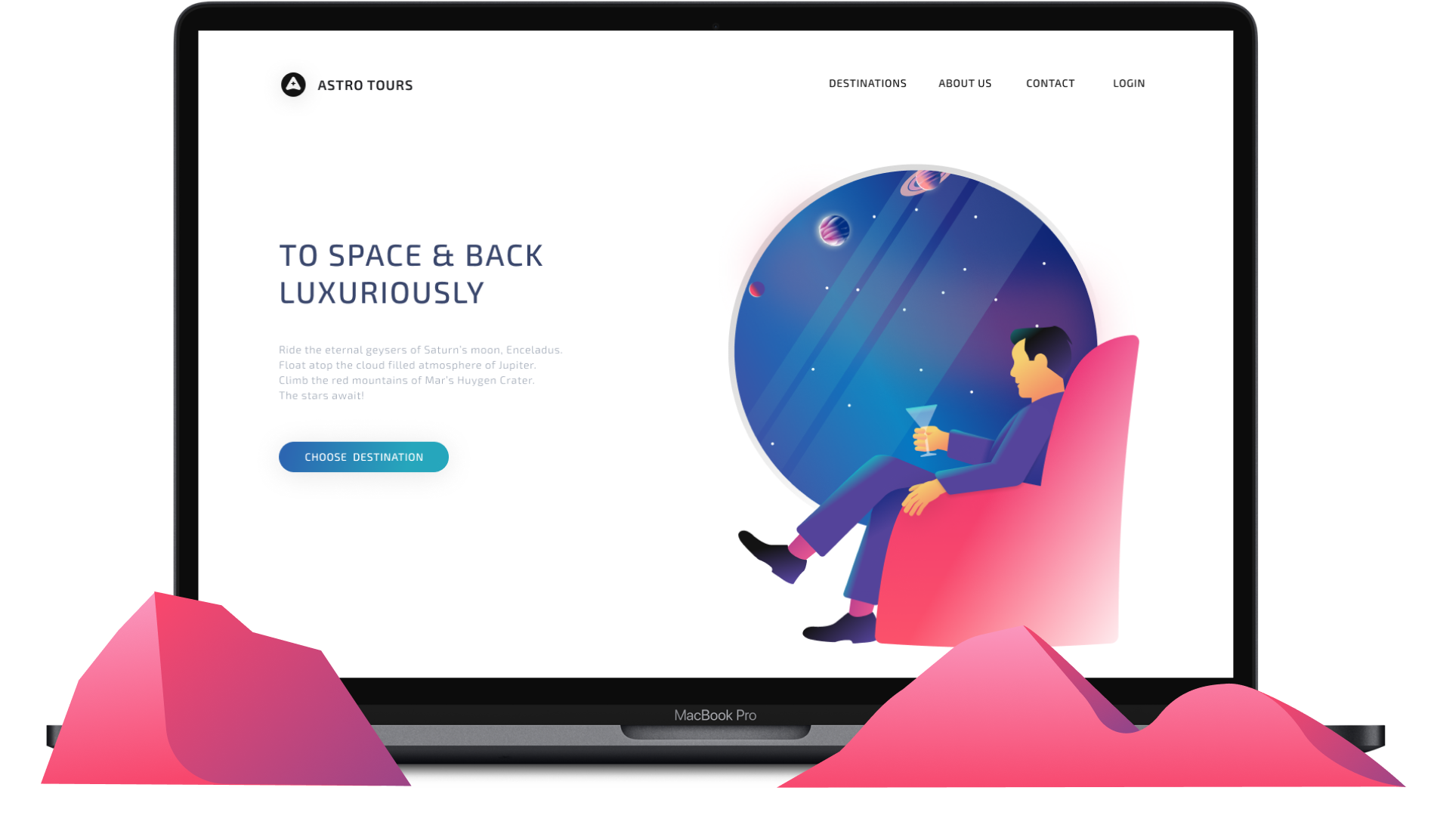 Why was this made?

This site was designed
to bring life to the great
interstellar handshake.

This site is a visage of the future. A playful and optimistic take on the next steps in mankind's journey.

Gamifying the greatest
adventure of
all time.

When I was throwing around the idea of a futuristic space tourism agency, I had several revelations about the world I wanted to implement into the design. One was the cross pollination of gaming into everyday life. More and more, menus, websites, and apps, are breaking down complex subjects into low-grade mini-games. Another was that traveling in space, where humanity is essentially a fish out of water, is terrifying. So how do you break down the fear to make space tourism a legitimate vacation? You do away with the suits, you get rid of the technical, you hide the technology. When you do that the feeling of dependence fades away. Suddenly, the passenger feels in control again.

The facilitator needs the app to set proper expectations prior to the passenger showing up. They need the app to tell the Passenger everything they need to know for a successful takeoff.

Passengers need the ticket-buying process to be quick, but monumental. Clicking "Choose Destination", should feel fun and engaging. It should feel like their journey has already begun. 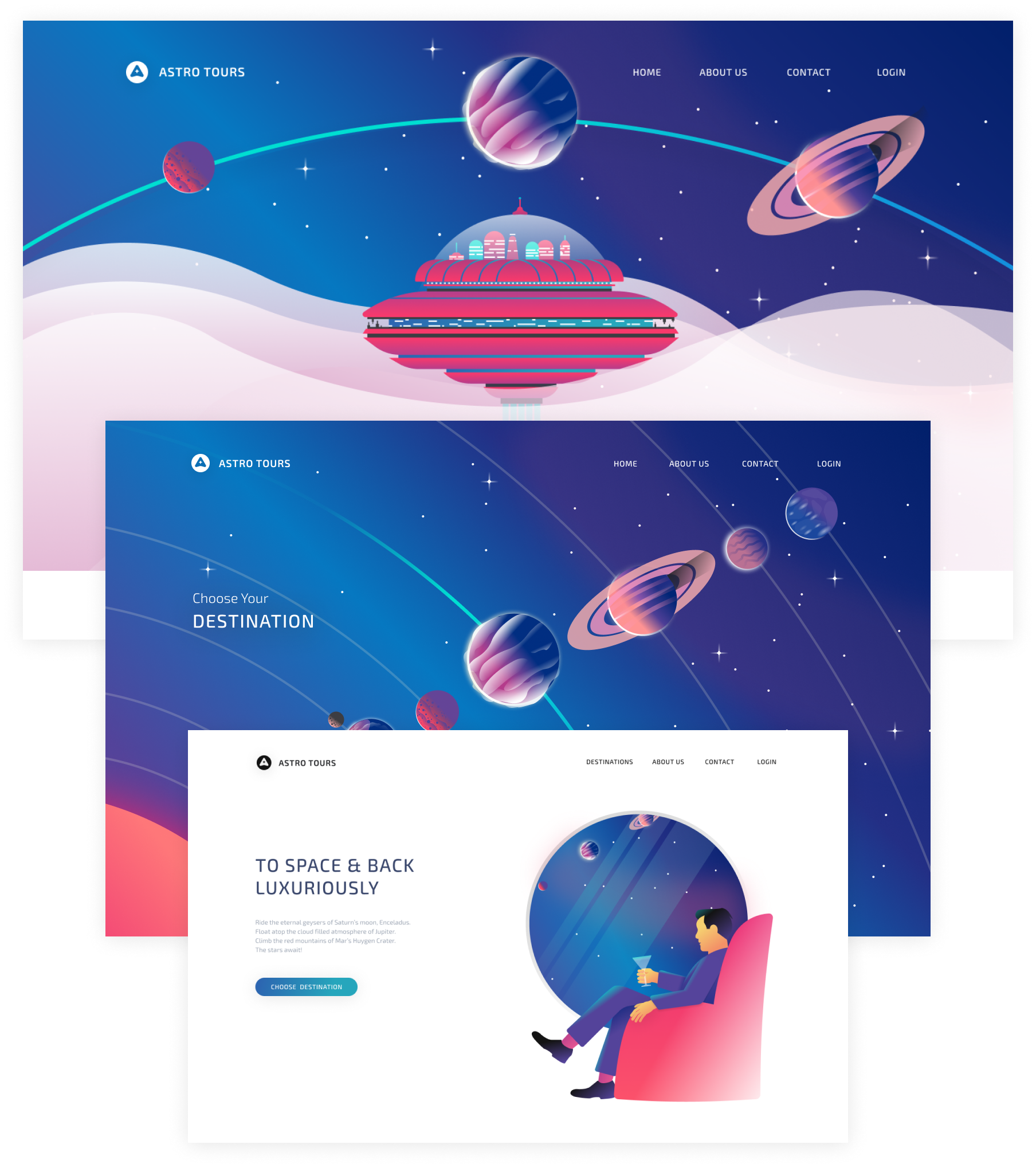 James Kirk possesses no superhuman powers, yet his skills, charisma, experience, and position as Captain of a Starship make him one of the most formidable humans in the Star Trek universe. He can beat Vulcans at chess and defeat low-level superhumans in hand-to-hand combat.

Jerome was a top class swimmer who despite his nearly perfect gene set only received a silver medal at the 2048 Summer Olympics. In response, he decided to make a career change. He would become a First Class Navigator at Gattaca Aerospace Corporation...

The first attempts at Astro Tours were based around a juxtaposition. The old retro stylings of the 1950's or 1960's, but in the future, where tech has become so advanced it's essentially disappeared. It's become hidden. Ultimately, the backbone of the idea was solid but the implementation of color and the juxtaposition was distracting. So it yielded to a cleaner aesthetic presence in the final screens. 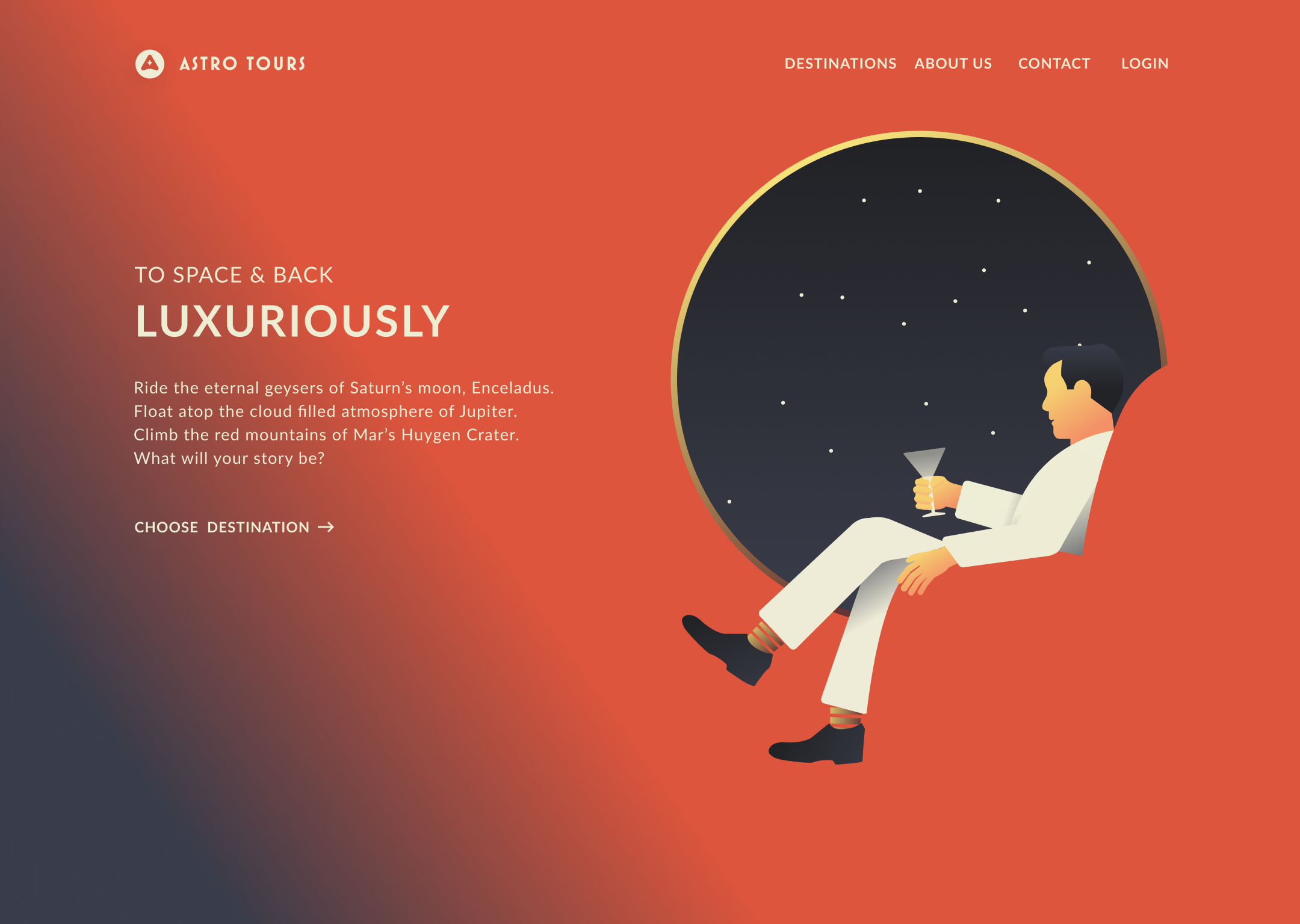 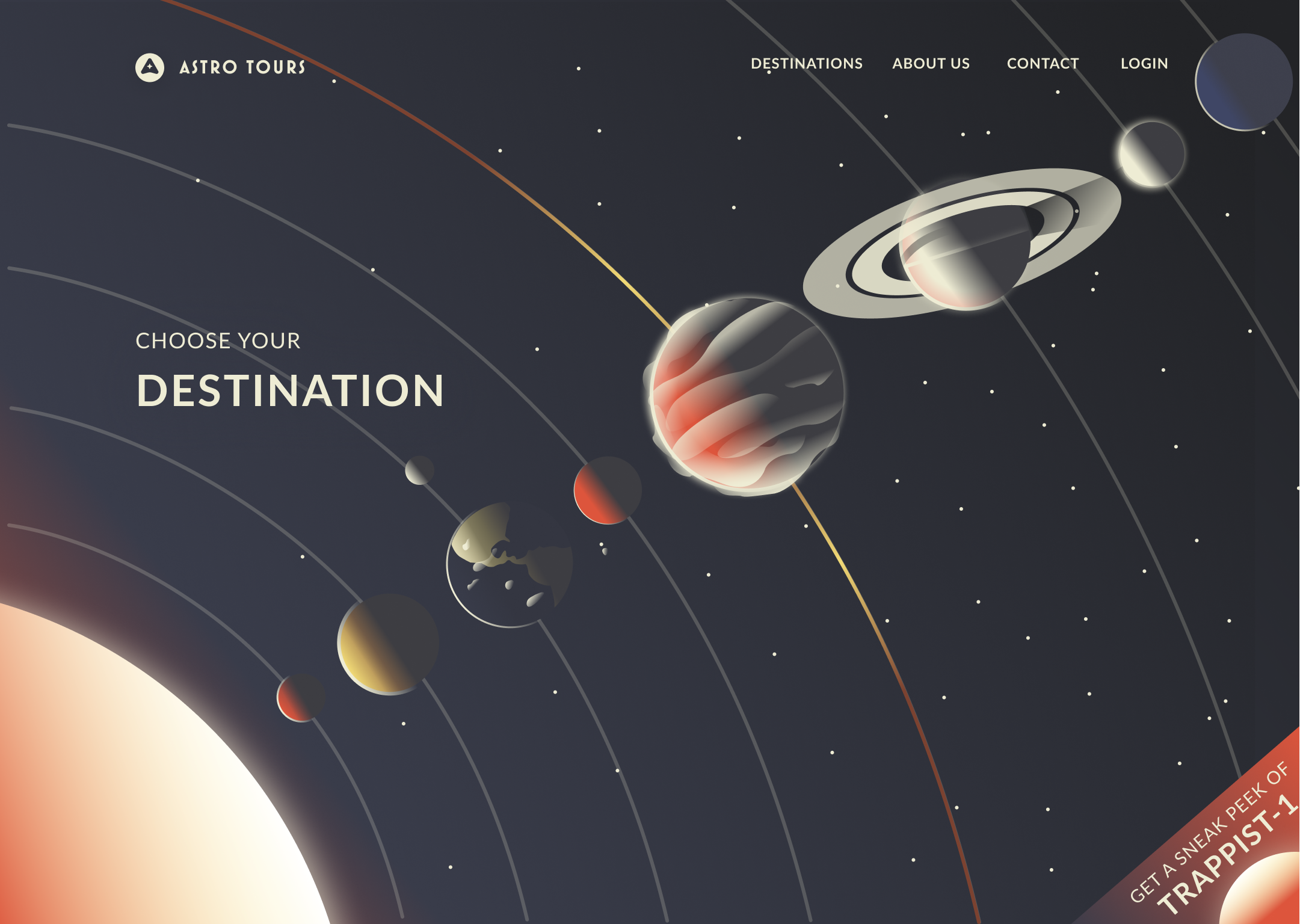 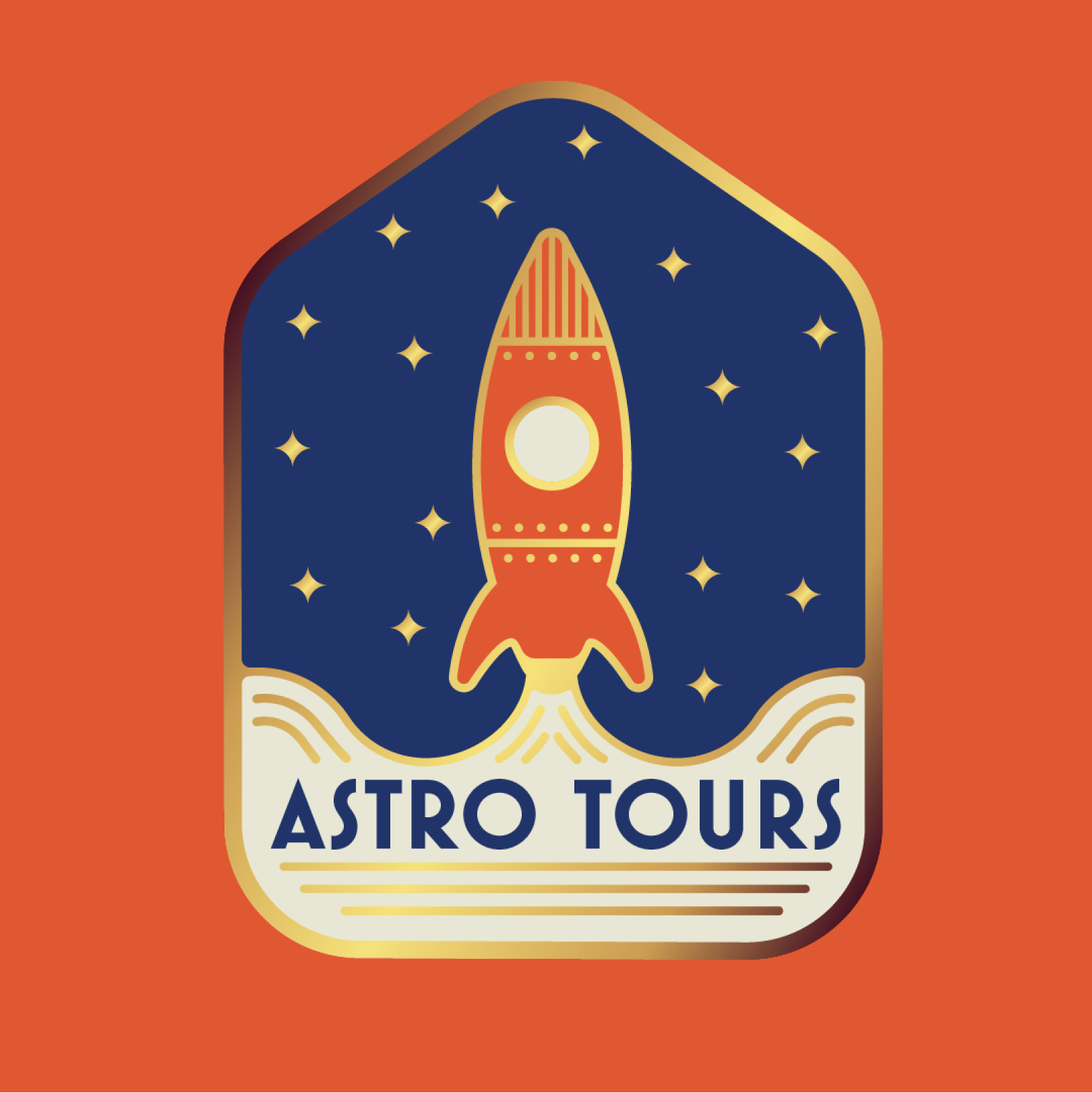 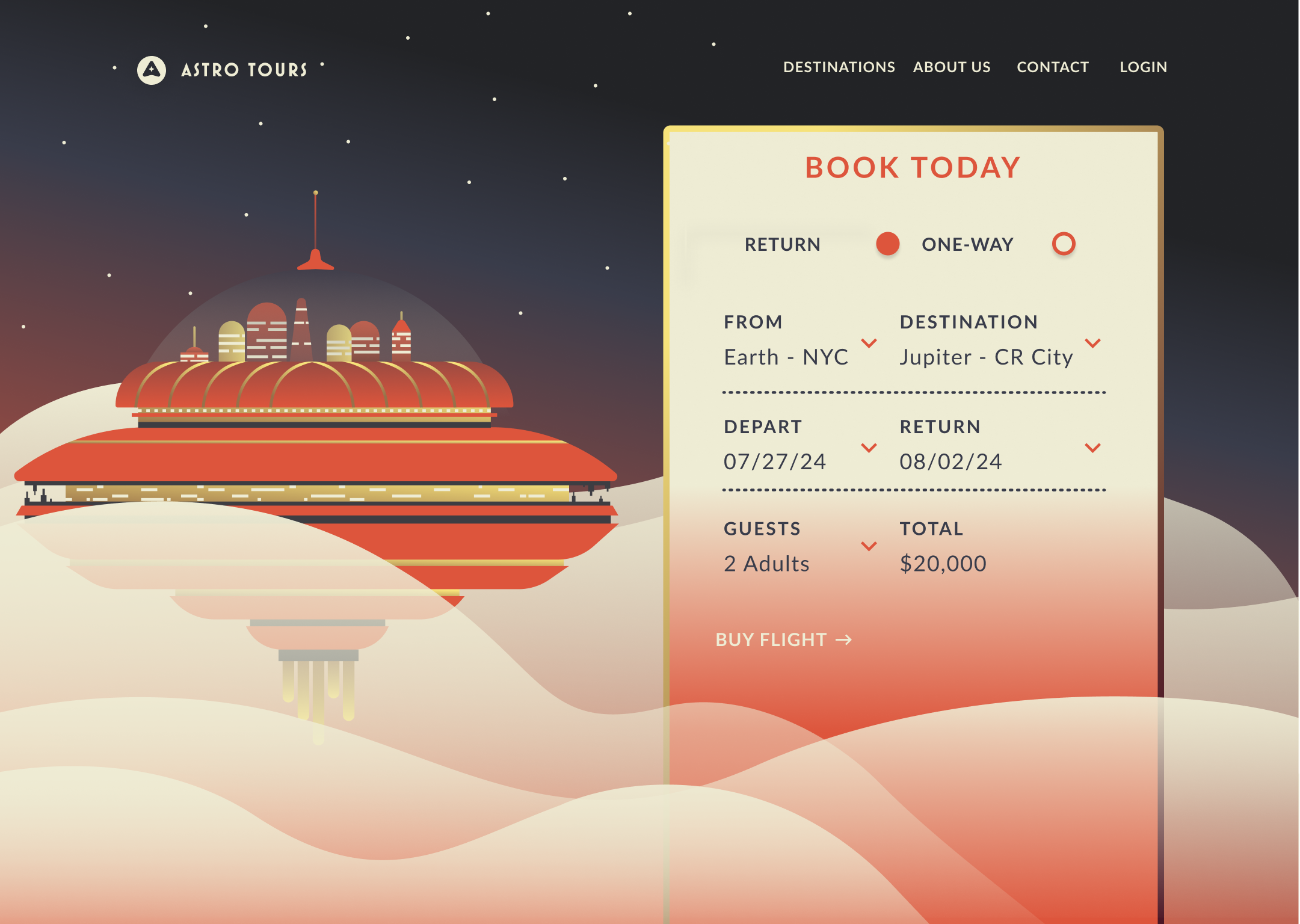 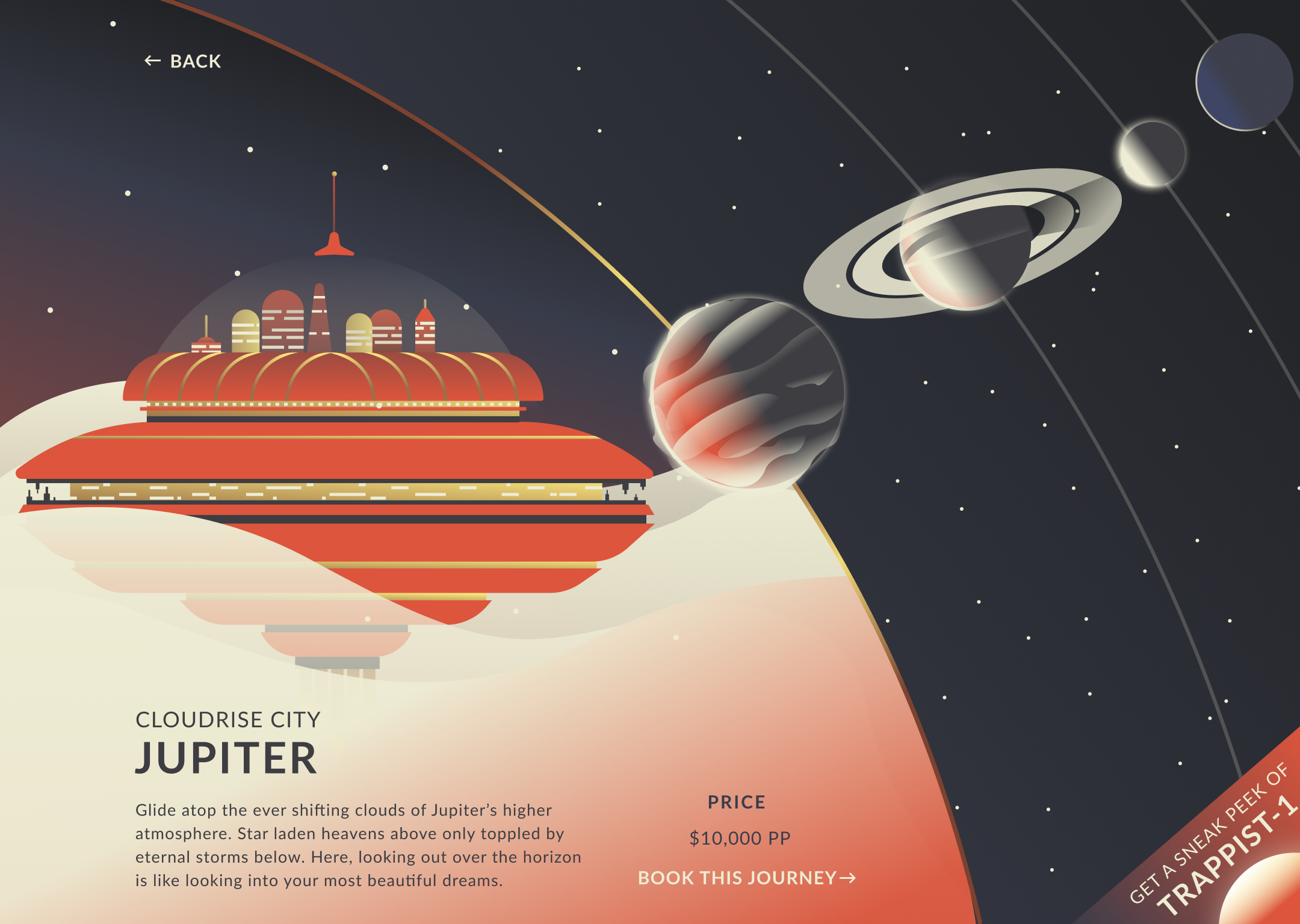 Below are the screens that were built out for the ticket booking interaction. You start out with the hero page, move to planet selection and once selected you fill out your details and book. It's meant to feel like a game or a precursor to the journey. 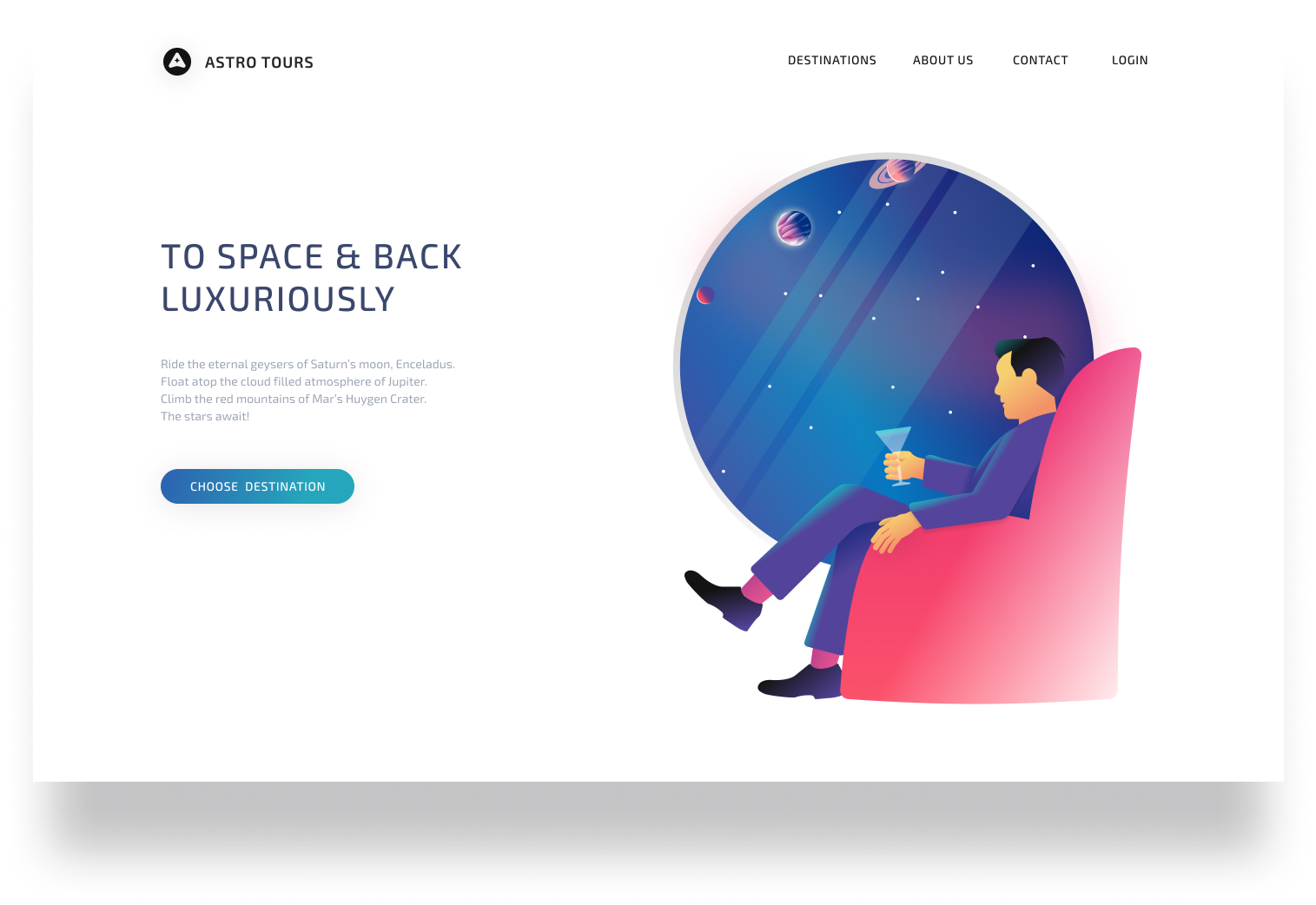 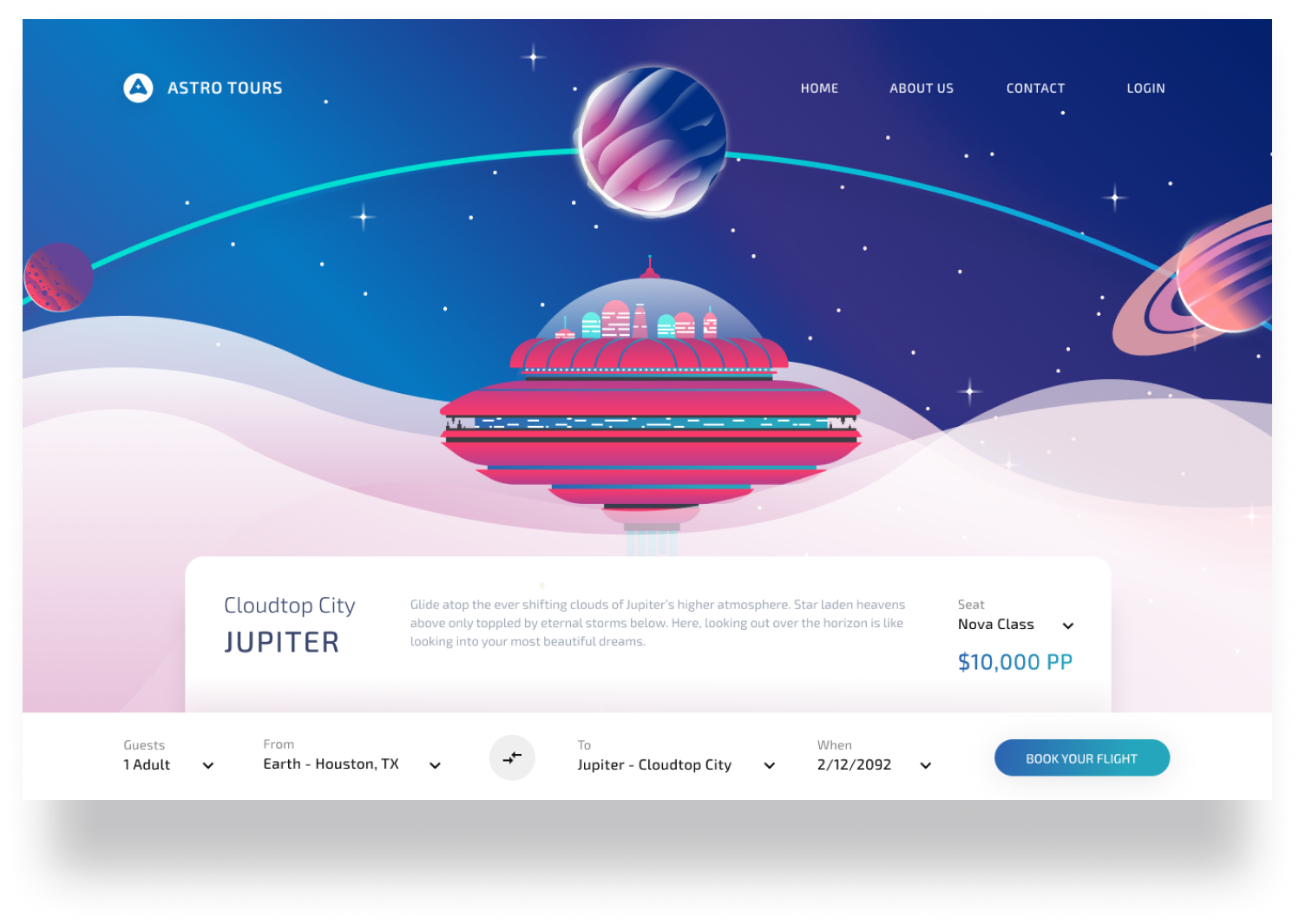 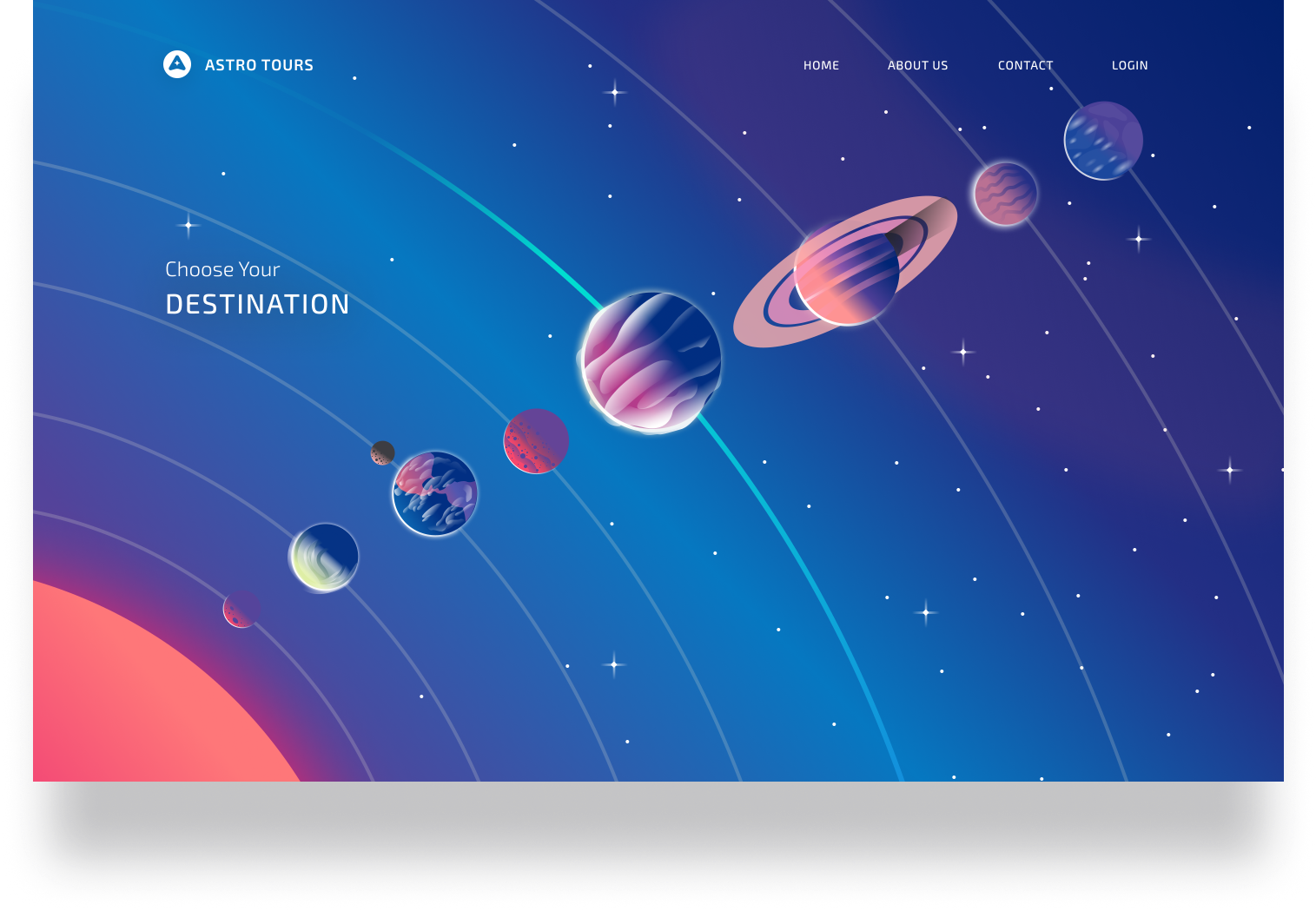 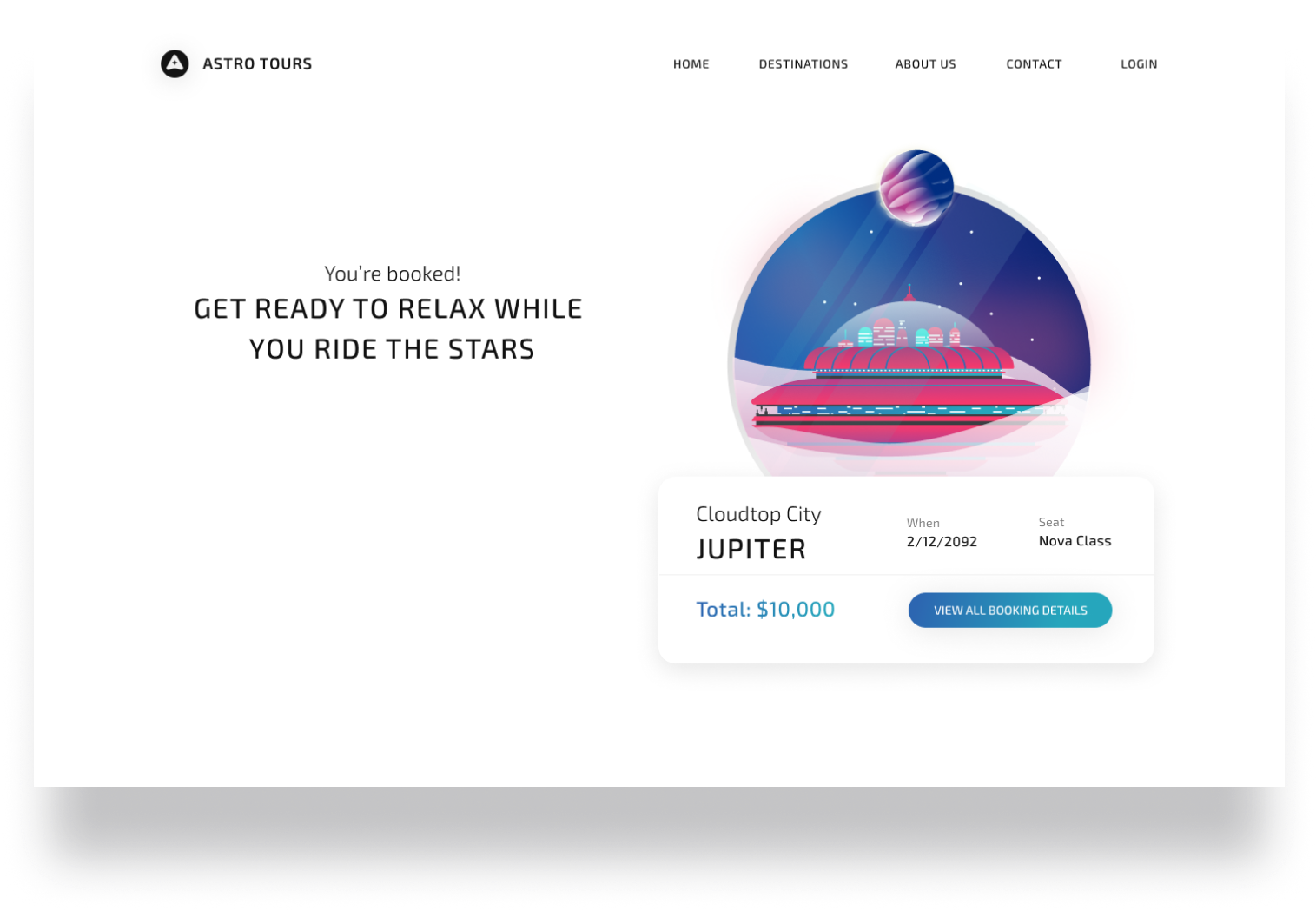 Astro Tours is a space tourism agency and I felt that the colors had to be bright and brilliant... visible from far away.
Space is full of exquisite colors, so Space Tours is oriented around those nebulous colors.
BLue
#0576c0
Magenta
#ea2972
Mint
#15d4ca
Dark Purple
#53439a
Branding Overview

Below is a simple brand aesthetic exploration. If you were to walk around downtown Chicago in 2230 and you looked up on the rain soaked sides of a colossal skyscraper, what would you see? Would the building look like it was moving because the whole side is animated to look like Jupiter's clouds? Would you walk past a poster only to see a spaceship take off from it? Imagine these adverts in the wild, they are here to help me flesh out the world.
UI/UX Design